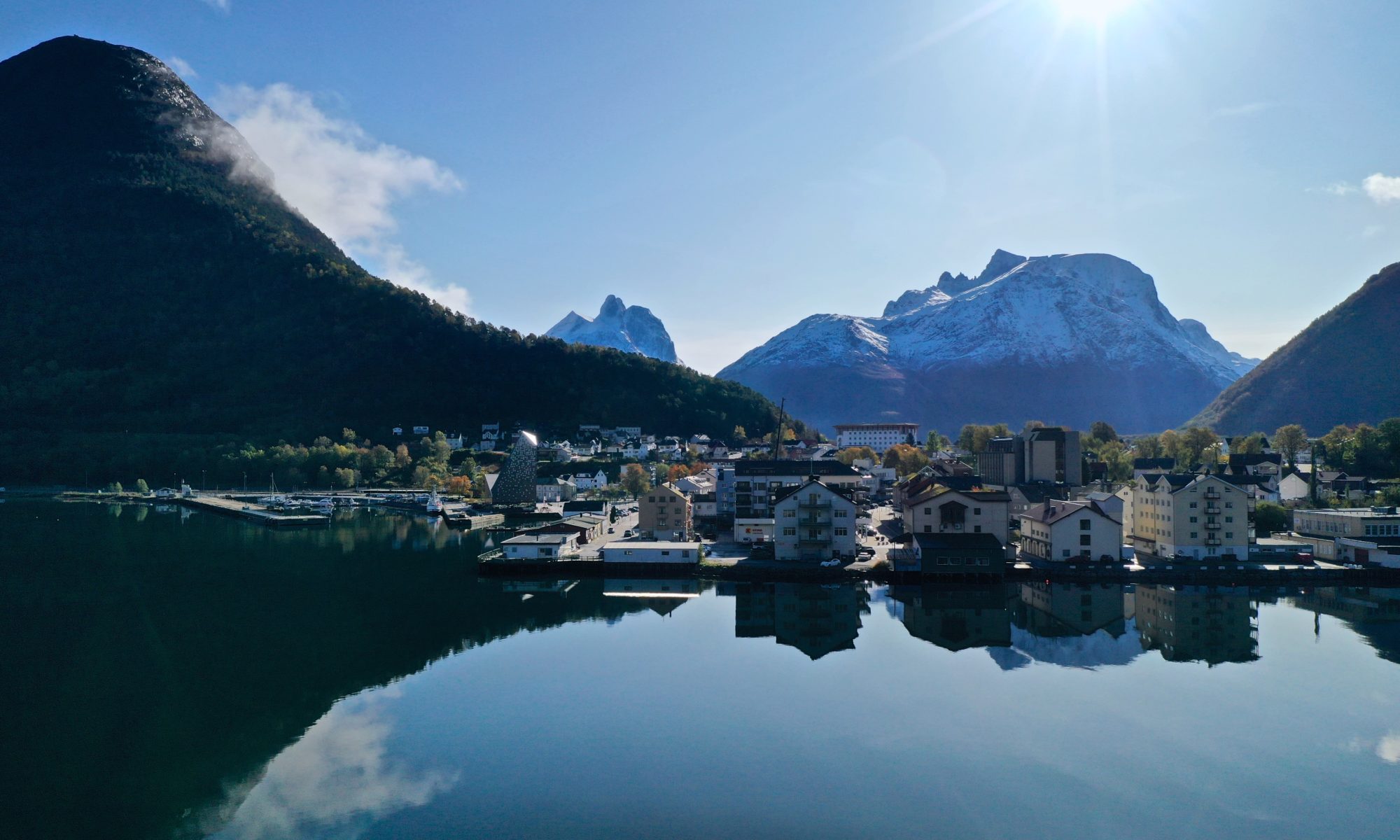 Åndalsnes is the “Hub” in Romsdal, and is situated in the middle of all the things that is worth seeing and doing in the Romsdalsfjord area.

Åndalsnes is a great place to stay if you want to see and explore Trollstigen, Trollveggen, the Rauma Railway and the Romsdalseggen Ridge.

A story from Peru in 1988. I was sitting at a bar talking to an American. The young man had traveled the world for four years and was on his way back to the States. The parents believed that all young people needed such a journey, a formative journey. I asked him what he remembered best from his adventure. Something that had stucked with him.

There were three places he would never forget, he said. The first was a lagoon on an island in the Pacific Ocean. Then there was Nepal. The third was as follows:

– I took the night train from Oslo, to a small place called Andalsness. I didn’t sleep that much on the train and that was fortunate. At end of the journey, the train went down a narrow valley called Romsdalen. The sun was coming up and set color on the mountains. I’ve never seen anything like it. Maybe the most beautiful place I’ve ever been…

The young Mr. Grøvdal becamed moved when he replied … “That’s where I’m born” ❤

Some highlights from Åndalsnes and the surrounding area

Åndalsnes is a great place to stay if you want to see and explore Trollstigen, the Rauma Railway and the Romsdalseggen Ridge.

Take the Romsdal Gondola up to the city mountain Nesaksla or hike the Romsdalstrappa Trail or the Romsdalseggen Mountain Ridge, one of Norway´s hiking icons. Romsdalsstigen Via Ferrata is also a must when you are in the area. The hike to Mt Litlefjellet is short, but the view you get at the summit is great.

The mountains in Romsdal, all of them “delivered” with fjord-view, are great for hiking, mountaineering, climbing, cycling and skiing, and attracts visitors from all over the world.

You can reach Åndalsnes by car, six hours from Oslo or four hours from Trondheim. By train to the end-station Åndalsnes at one of Norways most spectacular railways, Rauma Railway. The Rauma Railway between Dombås and Åndalsnes is voted as Europe´s most scenic Rail Journey by Lonely Planet. The nearest airport is in Molde, then one hour by bus or car to Åndalsnes.

The Rauma Railway between Dombås and Åndalsnes is voted as Europe´s most scenic Rail Journey by Lonely Planet. Take the train to the end-station Åndalsnes at one of Norways most spectacular railways.

From fjord to mountain in four and a half minutes. From Eggen Restaurant at the top of Mt Nesaksla you have a fantastic view down to Åndalsnes and the Romsdalsfjord. The Romsdal Gondola opened in the summer of 2021. The gondola goes from the fjord station at the center of Åndalsnes to the mountain station at Mt Nesaksla, 694 maf (meters above the fjord).

Trollstigen is one of our tourist icons. It is part of the Geiranger-Trollstigen National Tourist Route, 18 kilometer from Åndalsnes. The Mountain Road with it´s 11 hairpin turns is closed during winter, it usually opens late May. From the Trollstigen Mountain Platou there is a short walk to the two new Viewpoints which is great for taking pictures. Five to ten minutes walk from the parking.

The Troll Wall (Trollveggen) in Romsdalen

Romsdalseggen in Romsdal has in short time become one of the most popular hikes in Norway. The hike starts in the Vengedalen Valley in Isfjorden and ends in the city center of Åndalsnes. The prize is a fantastic view over the Romsdalen Valley and the Romsdalsfjord.

The Norwegian Mountaineering Centre at Åndalsnes

Norsk Tindesenter is a visitor centre at Åndalsnes, in the heart of Romsdalen Valley. The centre accommodates the Norwegian Mountaineering Museum, Norway’s highest indoor climbing wall, a restaurant and a gift shop. The centre is starting point for the spectacular climbing experience Romsdalsstigen Via Ferrata.

Salmon Fishing below the Troll Wall, in the river Rauma

In Norway, salmon fishing in the rivers has been important to people since the dawn of time. At the end of the 19th century, the salmon rivers also became an important source of secondary income for those who owned the rivers. That was when the English tourists discovered Norway, and the Salmon Lords became a well-known phenomenon. It was people from the English upper classes that travelled to Norway and the fjords to fish for Atlantic Salmons in the rivers. The river Rauma, which runs through the Romsdalen Valley and past the Troll Wall, was one of the rivers which the salmon lords liked. Today, Elveguiden offers salmon fishing in 22 fishing spots in the Rauma river, several of the spots are located just below the Troll Wall.

Romsdalsstigen Via Ferrata consists of two adventurous climbing trails: the Intro wall and the West wall, both of them are tailored with steel wires and iron steps. Challenge yourself by climbing up the rock wall without being a mountaineer. It is highly recommended to go along with one of the highly skilled via-ferrata guides. Starting point at The Norwegian Mountaineering Centre. Video by Tarjei Husøy.

Fjord Fishing on the Romsdalsfjord

Skipper and fishing guide John Kofoed takes you on an exciting fishing adventure after large fish or specific species of fish, all according to your wishes. The fishing banks are very close by Åndalsnes, and the Romsdalsfjord can offer the chance of big fish and a wide variety of species. All the fishing trips depart from the city center at Åndalsnes. Season all year. In the video below, John Kofoed’s fishing boat is on its way to Åndalsnes after a fishing trip on the Romsdalsfjord.

The Summer Boat on the Romsdalsfjord

The North West Experience’s summer boat takes you on unforgettable experiences on the Romsdalsfjord. The boat runs between Molde, Hjertøya, Veøya, Åndalsnes, Vestnes and Midsund. You can go on and jump off where you want. They also offer other boat trips that can be booked on request.

Hiking to Rampestreken Viewpoint at Åndalsnes

Part of the Romsdalseggen Ridge between Isfjorden and Åndalsnes in Romsdal. You can do the long hike along Romsdalseggen, and you will pass Rampestreken Viewpoint on the descend down to Åndalsnes (long and heavy hike). Or you can hike upwards from Åndalsnes to the viewpoint at 537 meters above the Romsdalsfjord (1-2 hour hike).

Isfjorden at the innermost part of the Romsdalsfjord

Isfjorden is a village at the innermost part of the Romsdalsfjord, close to Åndalsnes. Easy arrivals to the surrounding valleys and mountains which are great for adventures.

Do the 30 minutes hike up to Mt Litlefjellet, a mountain ridge (660m – 790 masl). Fantastic view down to the Romsdalen Valley and the surrounding mountains; Mt Trollveggen, Romsdalshorn, Vengetind and Blånebba. You can also see the beautiful Rauma River down in the Romsdalen Valley, meandering down to Åndalsnes by the Romsdalsfjord.

Drive to Isfjorden in Romsdal. Keep driving east, approximately 2.5 kilometer to Øvre Kavli. From there, around three kilometer (tollroad) to parking lot at the end of the road. From the parking lot you have a great view towards the Romsdalsfjord and Åndalsnes. Between one and two kilometers easy hike to Kavliheian.

A short detour by car (approximately 2.5 kilometer) from Riksvei 64 at Torvika between Åndalsnes and Åfarnes in Romsdal. Beautiful view towards the Romsdalsfjord and Innfjorden with it´s surrounding mountains. View from the road, no hiking necessary. But we recommend you to park the car at Torvika and walk along the road to Klungnes to get an even better experience.

From snowy mountains to beautiful coastline of islands and reefs. Experience all this in one day due to the short distance from mountains to coast. Ona Island and Lighthouse, The Atlantic Road and Midsundtrappene are attractiona facin the Atlantic Ocean. Trollstigen, The Troll Wall, Romsdalseggen, Rampestreken and Litlefjellet are great places to visit in the inner part of the Romsdalsfjord, where the fjord meets the spectacular and alpine Romsdal mountains. Travel green to Åndalsnes with Rauma Railway, a wild, beautiful and unique experience regardless of season. From Åndalsnes Railway Station, you can walk straight from the train and over to the Romsdal Gondola that takes you up to the city-mountain Mt Nesaksla and Eggen Restaurant. From there you have a fantastic view towards Isfjorden, down to the Romsdalsfjord and up towards the Romsdalen Valley which you have just experienced from the train ride along the Rauma Railway. The Romsdalsfjord is located in the county of Møre og Romsdal, north in Western Norway.

Accommodation at Åndalsnes and in Romsdal

Åndalsnes and the Neighbourhood – Map Overview