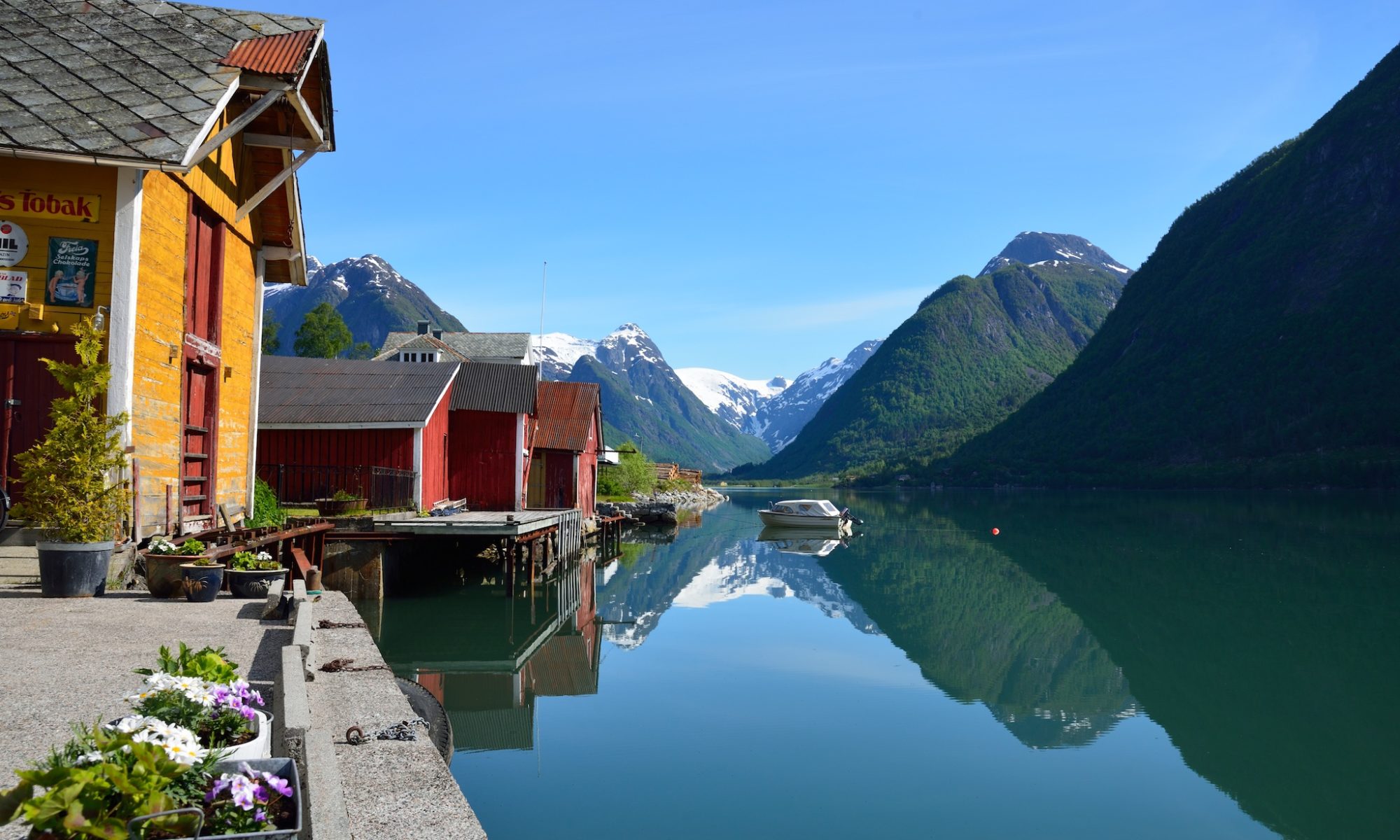 It was late May. We drove from Oslo to visit Fjærland in the Sognefjord, to spend some days in this picturesque village surrounded by fjord, mountains and glaciers. Map to use: Sogndal 1:50000.

May is a great month to visit the fjords. There are still snow in the mountains, the valleys are green, and the apple trees are blossoming.

SEASON & SAFETY – Many of the activities and attractions mentioned on this website are open only in summer and are closed in winter. This also applies to many of the roads and accommodations mentioned. Season and opening time will vary. It depends on where it is and what activity, attraction, road and accommodation it is, it usually opens in the summer and closes in the autumn, depending on i.a. the amount of snow and the risk of avalanches in the area. Read more about season, important safety information and your own responsibility…

We planned to cross the fjord in our kayaks and put up our tent on the other side of the fjord. But we arrived late in the evening, and it was dark outside. So we parked the car close to Fjærland, and found a spot with green grass by the fjord. The weather was just perfect for camping, so good that we left the tent in the car and let the stars be our roof for the night.

Next morning we had breakfast by the fjord. The water was flat like a mirror, the sun was shining, and the only sound we heard was the birds chirping. We entered our kayaks and glided into the Fjærlandsfjord. The first day we wanted to explore the inner part of the fjord, which is a branch of the 204 kilometer long Sognefjord. We had a great time on the fjord.

Later we strolled around in Fjærland. This place is so beautiful that it is almost unreal. It has it´s own museum, the Norwegian Glacier Museum. And Fjærland is also named The Norwegian Book Town due to all the bookstores in the town. It has a total of 2.5 miles with shelves filled with books, new and used. The smallest bookstore is a book stand by the road. Based on trust, you can pick a book and leave some money in a box.

SEASON: Summer. Check with Fjærland Guiding when they offer guiding.

Movie teaser from the fantastic panoramic movie from the Jostedalsbreen Glacier that can be seen inside the Norwegian Glacier Museum in Fjærland. The film is produced by Falkeblikk.

Fjord Cruise from Bergen to Fjærland