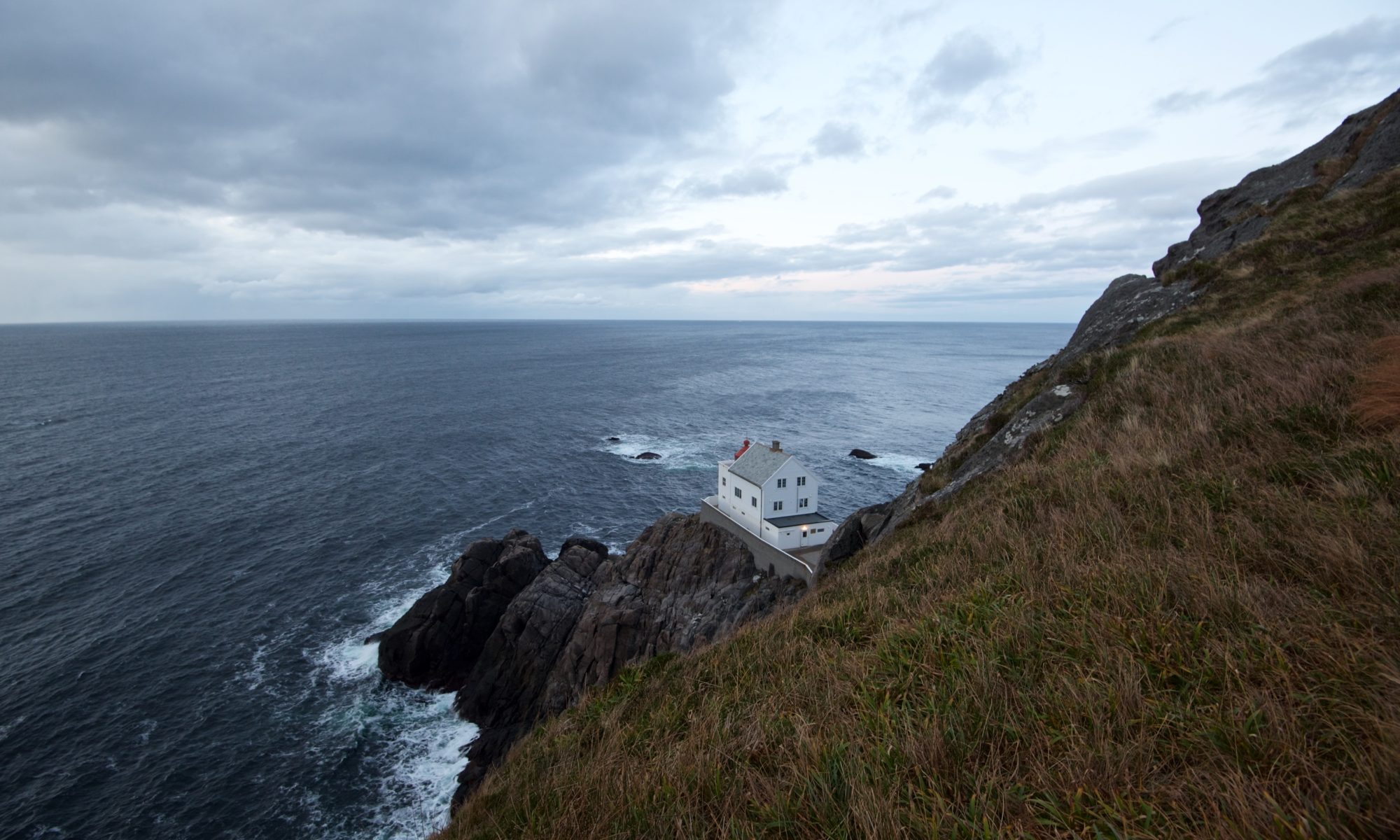 Kråkenes Lighthouse and the surrounding area with the view to the Atlantic Ocean is a popular goal for adventure seekers.

Kråkenes Lighthouse was built in 1906 and is located at Kråkenes, at the far end of Vågsøy in Kinn Municipality. Today you can stay the night over in the lighthouse and in Stormhuset near by.

Kråkenes Lighthouse with view to the Atlantic Ocean

The lighthouse at Kråkenes was destroyed during the Second World War, but it was rebuilt in 1950. In 1986, Kråkenes Lighthouse was automated.

Today, Kråkenes Lighthouse and the surrounding area is a popular goal for the locals but also for tourists.

It happens that the storms are so violent at Kråkenes that the sea spray strikes far above the lighthouse. When the storm is at its worst and the waves and the sea spray hits the windows, then it’s best to stay inside! Then it is not safe to be outside.

It is perhaps even more beautiful to experience summer and sunsets in the quiet Atlantic Ocean.

Ytre Nordfjord Turlag currently offers accommodation at Kråkenes Lighthouse and in Stormhuset, which is located 50 meters from the lighthouse. There is also a small café there in the summer.

The island of Vågsøy

Below you can see a video from the drive across Vågsøy Island, from Kvalheim to Kråkenes Lighthouse. During the drive you have a great view towards the Atlantic Coast and the Atlantic Ocean.

Kannesteinen is a three meter high mushroom-shaped rock that has been formed by ice and the waves from the ocean during thousands of years. There is a wheelchair friendly trail down to the beach where Kannesteinen is located. The rock is situated at Oppedal in the western part of Vågsøy, northwest of Måløy. It is a 33 kilometer long drive from Kråkenes Lighthouse to Kannesteinen.

Vestkapp (West Cape) at 497 masl is the westernmost part of mainland Norway. The view is epic. On a clear day you can see from the Sunnmøre Alps in the north to Ålfotbreen Glacier towards south east and Bremangerlandet in the south direction. The Vestkapp Cliff is quite flat, but do not walk too close to the edge due to the steep cliffs that ends straight into to the Atlantic Ocean 497 meters below you. It is a 100 kilometer long drive from Kråkenes Lighthouse to West Cape.

Grotle and Grotlesanden Beach is situated on Bremangerlandet Island at the Atlantic Coast outside Måløy. You need to take the ferry from Måløy to Oldeide to get there, then drive towards west across the mountainpass to Grotle at the western side of the island. Grotlesanden  is one of the most beautiful beaches in Norway. To see the beach and the Atlantic Coast from a bird’s eye view, you can hike up the hillside towards Mt Veten. The well marked trail starts at the outermost part of Grotle. It is a 46 kilometer long drive from Kråkenes Lighthouse to Grotlesanden, included a ferry from Måløy to Oldeide.

The stunning beach in Hoddevik on the west coast of Nordfjord is a popular goal for surfers all year round. Hoddevik and Stad is considered one of Norway’s best surf spots, also during winter. Stad Surfing and Ervik Surfshop will assist you with boards, dry suits and instructions. It is a 97 kilometer long drive from Kråkenes Lighthouse to Hoddevik.

Nordfjord – What to See and Do

The glaciers, fjords, sea and mountains in the Nordfjord area have some of the finest scenery Norway has to offer. Stryn Summerski, Hjelle and Segestad in Oppstryn, Rakssetra between Stryn and Loen, Loen Skylift and Via Ferrata, Briksdalsbreen Glacier in Olden, Lodalen Valley with Lake Lovatnet and Oldedalen Valley with Lake Oldevatnet are all must-visit places when you are in the inner part of Nordfjord. Vågsøy with Kråkenes Lighthouse and Kannesteinen, West Cape, Hoddevik and Bremangerlandet with the Grotlesanden and Vetvika Beaches are some of the most beautiful coastal landscapes in Norway. Hjelle Hotel in Oppstryn, Hotel Alexandra in Loen and Knutholmen in Kalvåg are all great places to stay. Nordfjord is located in the northern part of the county of Vestland, in the centre of Western Norway.

Nordfjord Tourist Information: Nordfjord – All in one Fjord