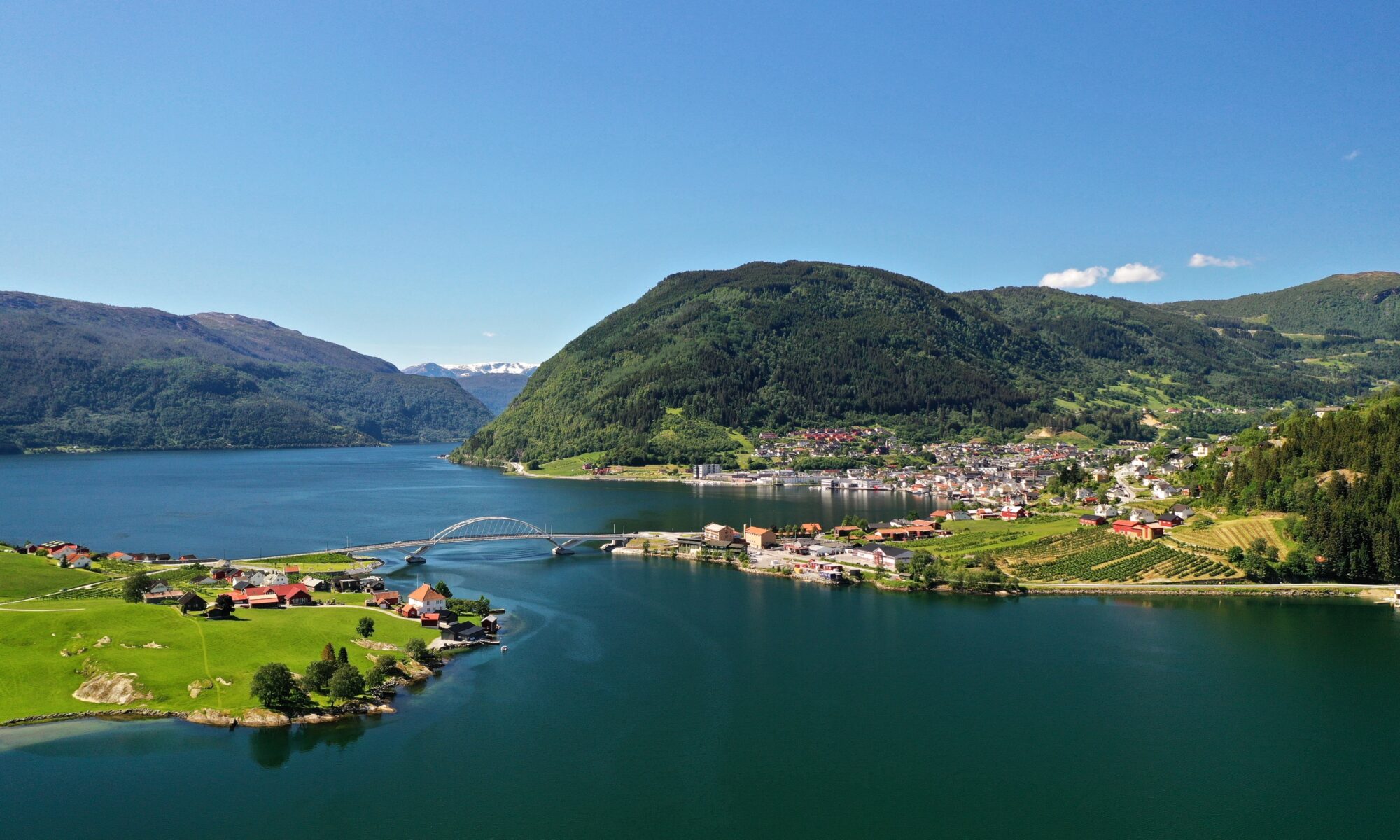 Sogndal is best known for it´s juice and jam, football and university. When it is autumn and the students come to the village, the population in Sogndal almost doubles.

But the fjord village is much more than juice, football and school. Sogndal is the very heart of the Sognefjord, and is a great area for activities and experiences in beautiful and wild nature. And from Sogndal there are only short distances to all the other side fjords of the Sognefjord.

Visit Sognefjord is the official destination company for the Sognefjord area.

Sogndal in the heart of the Sognefjord

Sogndal is located in the middle of all the side fjords of the Sognefjord. From Sogndal there is a short way to all the fjords in addition to being a great area for hiking along the fjord, kayaking, fjord cruises, mountain biking, climbing and bouldering, mountain hikes and skiing. Some of the side fjords are the Lustrafjord, Årdalsfjord, Aurlandsfjord and Nærøyfjord and the Fjærlandsfjord.

In summer you can take a fjord cruise from Sogndal to Fimreite. This is where one of the main historic events in the Viking-age, the battle of Fimreite, happened. In year 1184, King Sverre Sigurdsson with his 14 Viking Ships and King Magnus Erlingsson with his 26 Viking Ships met in the Sognefjord outside Fimreite for the final battle about the Kingship of Norway. King Sverre won the battle and King Magnus and more than 2000 men were killed in the battle.

Sogndal is surrounded by some of the most famous mountains for skiing and mountaineering in western Norway. The mountains in the Sogndal Area are well known for it´s powder snow, and many of the mountains have great fjord view. Hodlekve Ski Resort in the Sogndalsdalen valley is great for skiing in well prepared slopes and also for it´s crosscountry skiing.

Fjord Cruise from Sogndal in the summer

Fjord X offers fjord cruises starting from Dampskipskaien in Sogndal in the summer months of June to August. You can choose between Historic Viking Cruise and Evening Cruise. Historic Viking Cruise is a great fjord adventure that goes out the Sogndalsfjord from Sogndal to Fimreite and back to Sogndal. Experience the story of the battle of Fimreite in year 1184 and the famous submarine-hunt in the Sognefjord during the cold war. The Evening Cruise is a nice and quiet fjord cruise from Sogndal and into the idyllic Barsnesfjord.

The Fjord Trail in Sogndal

The outdoor museum The Heiberg Collection at Kaupanger is a beautiful oasis where you are brought back in time, to different eras where you can see and experience what life in the Sognefjord area was like before. It is a great experience to walk around the outdoor museum and look at the old buildings and to see the animals grazing, and to enjoy the silence and the beautiful view towards the Sognefjord and the mountains in the distance. Here you can get the feeling of what life was like in the old days.

The science center ViteMeir at Kaupanger is a mix of a playground, a laboratory, a show, and a museum. ViteMeir is a place to explore and learn and inspires children and adults to seek new experiences together. A visit to the Virtual Reality Simulator will take you on a journey from the bottom of the Sognefjord at 1308 meters below sea level to Galdhøpiggen, the highest mountain in Norway at 2469 meters above sea level. Watch the movie about how the Sognefjord, Norways deepest and longest fjord has been created over time.

Kaupanger Stave Church has been in continuous use since it was built around year 1140. It is one of the largest Stave Churches in Norway, and is built with wood from the forest around Kaupanger.

Ferry trip on the Sognefjord between Kaupanger and Gudvangen

Kaupanger is one of two ports where the iconic ferry trip on the inner part of the Sognefjord departs and arrives. This is a two and a half hour long fjord cruise on the Sognefjord and the Aurlandsfjord and Nærøyfjord, between Kaupanger and Gudvangen. You can take your car on this ferry trip. Season: Summer, see link for more information about season and scedule.

Between Fjærland and Sogndal, you can explore the beautiful Sogndalsdalen Valley and the Anestølen Mountain Farm where you can buy homemade goat´s cheese during summer. The video below is from lake Dalavatnet in the Sogndalsdalen valley.

Skiing in the Sognefjord area

The mountains in the Sogndal Area are well known for it´s snow and the fjord view. Hodlekve Ski Resort in the Sogndalsdalen Valley is great for skiing in the well prepared slopes and also for it´s crosscountry skiing. From Sogndal, it is a short drive to Sogn Ski Center at Hafslo.

In Sogndal, they even make they´re own skis, SGN Skis, design to fit the Norwegian Mountains and the Norwegian snow. The Ski-festival Fjellsportfestivalen is arranged in Sogndal every year in February.

Nils Olsson Reppen from Sogndal – a pioneer in fjord-photography

Photographer Nils Olsson Reppen was born in 1856 on the farm Reppen in Sogndal in western Norway. His pictures from the Sognefjord area from around year 1900 is a treasure from a bygone era.

In 1898, he moved back to Sogndal and lived in Tårnhuset in Sogndalsfjøra. In 1965, Tårnhuset burned down to the ground and most of his glass plate negatives were lost. There are 424 negatives left from Reppen, they are stored at Fylkesarkivet in Vestland.

It shouldn’t really be possible for a small village located deep in the Sognefjord to have a football team that has a “voucher” to the Norwegian Elite League in football. But in Sogndal, everything is possible. The best position in the Norwegian Elite League is 6th place in -88, they were finalist in the Norwegian League Cup in -76, and the audience record of 7,000 spectators was also set in -76 when Sogndal met Start in the quarter-finals of the Norwegian League Cup. Just to mention it, the population in Sogndal is under 5,000. Video: Sogndal Football and Ylvis.

Lerum Saft og Syltetøyfabrikk (squash, juice and jam factory) are synonymous with Sogndal. It is not without reason that Sogndal is called Saftbygda (the Squash Village). Saft og Syltetøyfabrikken started at Sørheim by the Lustrafjord in 1907. Old N.H. Lerum’s Saftfabrik AS at Sørheim is today a museum that you can visit in the summer. See the website of the museum for information about the season and opening hours.

In 1919, Lerum moved the production to Sogndal. Now they have gathered all production in a new and modern factory at Kaupanger, which is only a few kilometers from Sogndal. Lerum is Norway’s largest juice and squash producer, and much of the raw material is short-travelled fruit and berries from the area around the Sognefjord.

My own favourites from Lerum? Solbærsirup (blackcurrant squash) and Mosa Jordbærsyltetøy (mashed strawberry jam)…yum😋 I always have thinly mixed Solbærsirup with me on hikes. It taste good, it helps with thirst and gives me a lot of energy at the same time.

The University at Vestlandet in Sogndal

Every autumn, when the students come to the village, the population in Sogndal almost doubles. More than 3,000 students from all over the country have perhaps their very best years in Sogndal, which is known for its great student environment. The University in Sogndal has a wide range of studies to choose from. Teacher Education, Engineering- and Maritime subjects, Sports- and Outdoor subjects, Economics, Tourism Management and Health- and Social studies are some of the subjects you can study at the University at Vestlandet in Sogndal. Video: The University at Vestlandet

Kjørnes Camping at Kjørnes in Sogndal was in 2014 voted as Norway’s best campsite. The high standard campsite offers cabins, apartments, many places for motorhomes, caravans and tents and several service buildings. Kjørnes Camping is beautifully located down by the shore of Sogndalsfjorden.

It was late May. We drove from Oslo to visit Fjærland in Sogn, to spend some days in this picturesque village surrounded by fjord, mountains and glaciers. May is a great month to visit the fjords. There are still snow in the mountains, the valleys are green, and the apple trees are blossoming. Kayaking on the Fjærlandsfjord and hiking to the glaciers were some of of the adventures we experienced.

Accommodation in Sogndal and Kaupanger

Eat and Drink in Sogndal – some recommendations

How to travel to Sogndal

It is easy to travel to Sogndal and the Sognefjord, you can travel there by a combination of car, bus, train or plane.

The nearest airport is Sogndal Airport at Haukåsen near Kaupanger. Most flights that go to and from Sogndal Airport come from and go to Oslo and Bergen. The driving distance from the airport to Sogndal is 19 kilometers, there is a bus connection between Sogndal and Sogndal Airport.

You can travel by train from Oslo or Bergen to Myrdal station. Then you get to experience the Bergen Railway between Oslo and Bergen and Flåm Railway, one of Norway’s most spectacular railway lines, from Myrdal station to Flåm, which is located down by the Aurlandsfjord. If you take Flåm Railway, you get to experience the beautiful Flåmsdalen valley at the same time. The driving distance between Flåm and Sogndal is approximately 72 kilometres, including a ferry crossing over the Sognefjord.