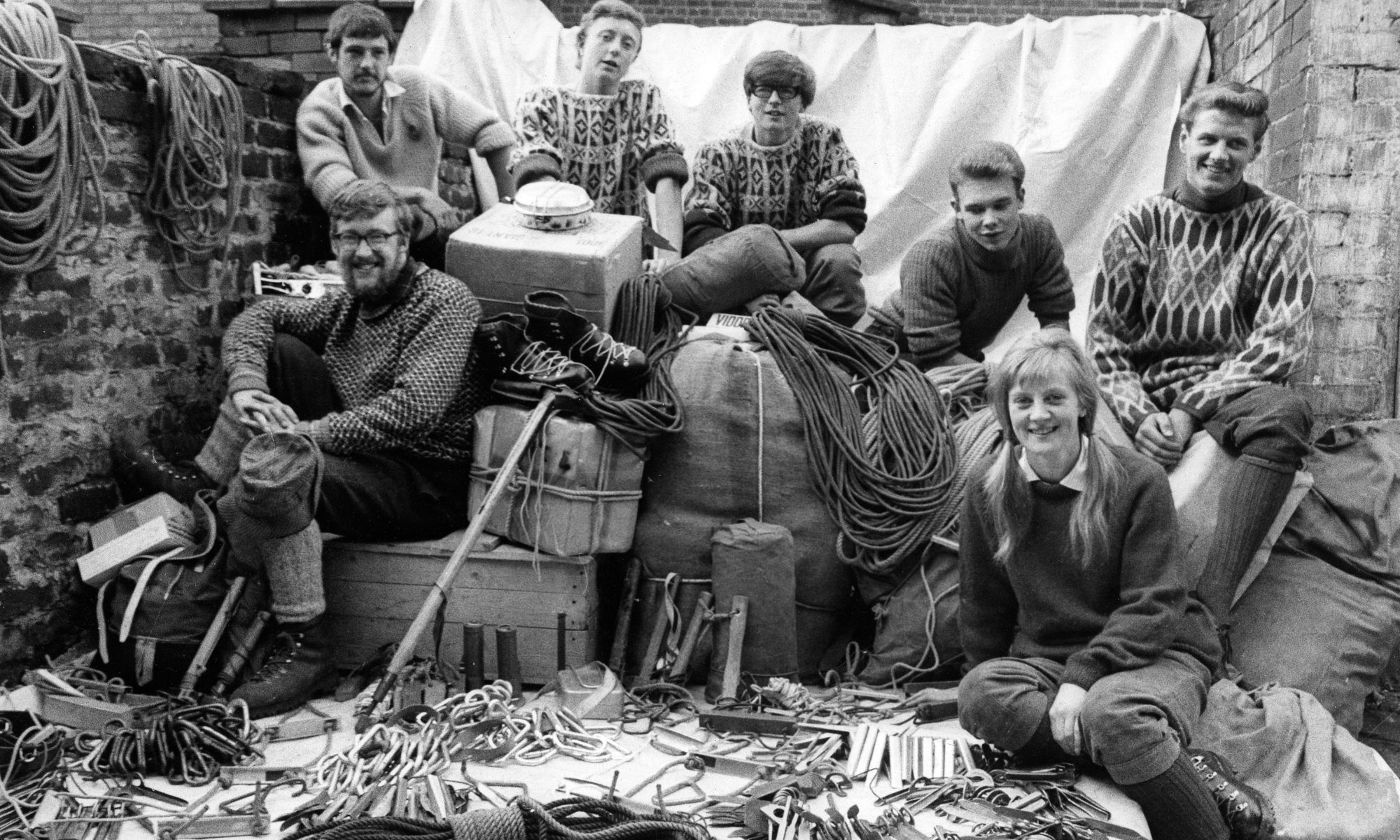 If you were into new routes and big walls in the 1960s you would have known about a monster in Norway about which ominous stories circulated that can be summed up in one word: ‘unclimbable’.

The Troll Wall (Trollveggen) in Romsdal was also known as ‘the Vertical Mile’, and described as ‘the largest overhanging wall in Europe’. It was reputed to be smooth and holdless for 5,000 feet, and impossible without the aid of bolts. It also faces north and is as far north as Alaska’s Mt McKinley. Quite a proposition!

By Tony Howard – Member of The Rimmon Team from the Peak District in England which climbed the Troll Wall in 1965.

Strange then that none of the ‘big boys’ went for it. Instead a team from a small Peak District club called The Rimmon decided it was worth a go and in July 1965 despite everyone’s doubts and some horrendous weather they actually climbed it.

Apart from me, the rest of the team were Tony Nicholls (Nick), Bill Tweedale, John Amatt, Rob Holt, Jeff Heath and Margaret Woodcock. The six lads spent numerous days in bad weather on rain-soaked rock establishing a bivy at the foot of the face above the Introductory Slabs. The first attempt by Bill, Nick, John and me failed after five days, once again in atrocious weather, Nick getting us off the wall and trashing his hands in the process, which made it impossible for him to return. Bill, John and I returned a couple of days later and succeeded in five and a half days summiting just before another storm broke.

Following the ascent, one well known British climber who was very familiar with Norway actually wrote to JEB Wright, the editor of Mountaincraft implying that we must have found a way to sneak up the back without being noticed, but in the end the letter was never published. Conversely, Joe Brown said “The ascent must rank as one of the greatest ever achievements by British rock climbers”, and Aslak Aastorp, a top Norwegian climber, described the route as “a masterpiece of route finding at the highest free and aid standards of the day”. I think his grade comments were over enthusiastic, but I liked the route finding bit, as finding what proved to be the best natural line up the wall was something I was always pleased about.

“One of the greatest ever achievements by British rock climbers.” – Joe Brown

Perhaps the most unusual thing about the ascent was that a team of Norwegian climbers arrived in Romsdal a day or two before us and by the time we arrived they already had a rope fixed on the wall. They had claimed their route. To our great relief it wasn’t on the route we had planned. To this day I’m not sure if it was a coincidence or they had been tipped off by Arne Randers Heen, Norway’s elder statesman of climbing with whom I had been corresponding.

The presence of two teams on the face was tailor made for a press hey-day. ‘The competition’ was in the news every day both in Norway and the UK. Though it never was a competition. The Norwegians, Leif Norman Pattersen, Odd Eliassen, Ole Daniel Enersen, Jon Teigland and girlfriends were camped not far from us. Leif Norman and Jon had both climbed in the Himalaya, whilst Ole Daniel and Odd were also amongst Norway’s top climbers.

Unlike us they were armed with an impressive collection of American hardware including Jumars and  chrome-molly pegs which had been brought out from the States by Leif. It was all brand new on the market and totally unavailable in Europe. We, on the other hand, were stuck with Heibeler prusiks that were untrustworthy and our soft steel European pegs that crumpled at the first obstacle. Descenders were still to be invented as were sit harnesses. The Norwegians had chest harnesses. We had a waist belt of my design which could be made into a sit harness for abseiling and climbing roofs by the addition of a sit sling. It later became the Troll Mark 2 which led to the design of The Whillans Harness, then the Troll Mark 5 Harness designed by me, on which almost all modern climbing sit harness designs are now based. Our Troll Wall ascent was probably the last of the world’s big walls to be climbed in the old style with with ‘old gear’. No sit harnesses, no reliable ascenders, no descenders, no modern range of nuts, and bivy gear and waterproofs so bad we almost died.

But I digress. When we retreated on our first attempt, the Norwegians were in a better situation and survived the storm. As soon as the weather improved they continued with their route and topped out a day before us after eleven days on the face, much to the jubilation of the Norwegian press. Of course Bill, John and I were unaware until we came down after completing our route the following morning to be met by the press and members of both teams armed with copious amounts of celebratory beer before we were all feted in the Grand Hotel. It was reported in the Norwegian press that the Norwegian team ‘thought our achievement on the Troll Wall put theirs in the shade’, which was over-kind of them and far too modest.

The years after the climb – and the 50th anniversary in 2015

On the 50th anniversary of the climbs, both teams were invited to Romsdal for a celebratory reunion at the annual Mountain Festival in July. Arne Larsen wrote an article in the Norwegian magazine Klatring (Climbing) about the leader of the Norwegian team, Leif Norman Patterson. The story, which was later translated to English by Anders I. Ourom, says of Leif, he “was, by far, the most experienced of the four man team.

By 1965 he had nearly ten years’ experience on the hills, and was well known in the USA for his many challenging winter climbs. In addition he also brought much newly designed climbing equipment to Norway – hard steel pitons, several hundred metres of first-class ropes and slings, and Jumar rope-clamps which would be indispensable on the wall. It isn’t overstating the case to say that without Leif Norman Patterson’s initiative there probably wouldn’t be a Norwegian Route on the Troll Wall, and the British team would not have had to share with others the honour of the first ascent of North Europe’s highest and steepest mountain wall.” Which overlooks the undoubted ability and commitment of the the rest of the team who, I’m sure were quite capable of overcoming any obstacle met on their route even without their new American gear and Leif’s undoubtedly inspirational leadership.

Rob Holt and I were the only two Brits who were able to make it to the 50th reunion. Though he was not on the actual ascent, Rob, who was 18 at the time, had provided unselfish back up for our climb getting gear up to and down from our first bivy then in 1967 he did the third ascent after Pete Livesey and John Stanger did the second.

Jon, Ole and Odd represented the Norwegian team, Leif Norman having been killed in the Himalayas. The five of us were together on stage reminiscing about our ascents, taking questions from the audience and later being interviewed by the press and Norwegian TV. None of us had expected the fame and limelight created fifty years ago by the press in their concocted stories of ‘Climbers Compete on the Troll Wall’, so it was a perfect opportunity to dispel the myth.

In the intervening years the Norwegian Route has only had about ten repeat ascents. I still think it was technically the most difficult of the two whilst the Rimmon Route became the most popular climb on the face until 1998 when a huge section of the wall collapsed. Rumours of subsequent ascents have never been verified. I’m happy to say that both the first ascents (if I may call our route that, since actually we were second!), were the epitome of good old fashioned adventure climbing, poking the dragon to see what happens. How good it was to get together with the Norwegian lads once again after all those years!

Åndalsnes – the “Hub” by the Romsdalsfjord

Åndalsnes is the “Hub” in Romsdal, and is situated in the middle of all the great things that is worth seeing and doing in the Romsdalsfjord area. Åndalsnes is a great place to stay if you want to see and explore Trollstigen, Trollveggen, Rauma Railway and Romsdalseggen Mountain Ridge. Geiranger and the Geirangerfjord and the Atlantic Road are well known places nearby.