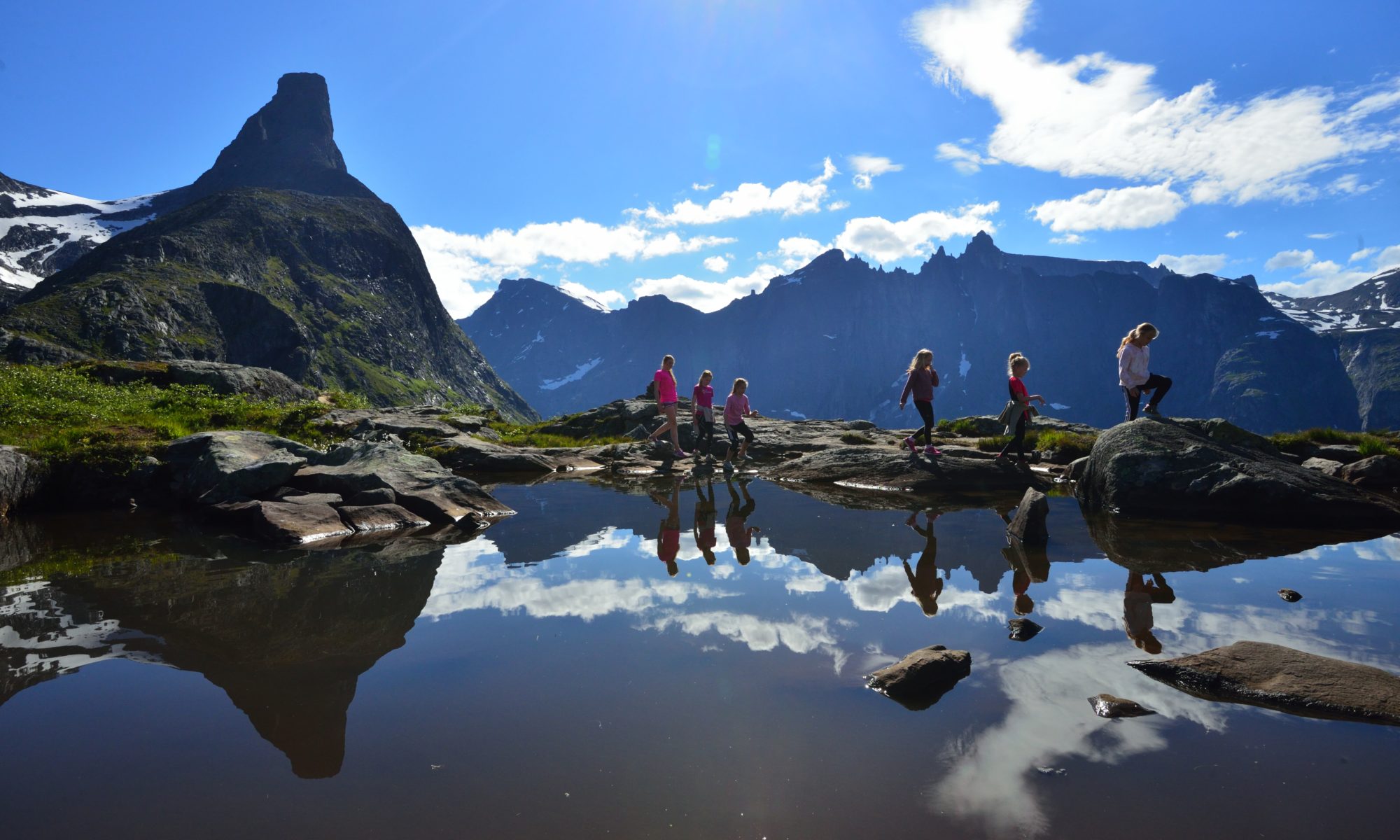 The Romsdalsfjord, from snowy mountains to beautiful coastline of islands and reefs. Experience all this in one day due to the short distance from mountains to coast.

Trollstigen, the Atlantic Road, Romsdalseggen and Midsundtrappene are great places to visit when you are in Romsdal. The Romsdalsfjord is located in the county of Møre og Romsdal, north in Western Norway.

Some highlights from the Romsdalsfjord area

From snowy mountains to beautiful coastline of islands and reefs. Experience all this in one day due to the short distance from mountains to coast.

Ona Island and Lighthouse, The Atlantic Road and Midsundtrappene are attractions facing the Atlantic Ocean. Trollstigen, The Troll Wall, Romsdalseggen, Rampestreken and Litlefjellet are great places to visit in the inner part of the Romsdalsfjord, where the fjord meets the spectacular and alpine Romsdal mountains.

Travel green to Åndalsnes with Rauma Railway, a wild, beautiful and unique experience regardless of season. From Åndalsnes Railway Station, you can walk straight from the train and over to the Romsdal Gondola that takes you up to the city-mountain Mt Nesaksla and Eggen Restaurant. From there you have a fantastic view towards Isfjorden, down to the Romsdalsfjord and up towards the Romsdalen Valley which you have just experienced from the train ride along the Rauma Railway.

The Romsdalsfjord is located in the county of Møre og Romsdal, north in Western Norway.

Travel green with Rauma Railway to Oslo from the Romsdalsfjord

The Rauma Railway between Dombås and Åndalsnes is voted as Europe´s most scenic Rail Journey by Lonely Planet. Take the train to the end-station Åndalsnes at one of Norways most spectacular railways. Tom Cruise used the Rauma Railway when filming Mission Impossible 7.

Åndalsnes – the “Hub” in the Romsdalsfjord

-Then he told him about Åndalsnes, a tiny settlement up in Romsdalen Valley, surrounded by high mountains which were so beautiful that his mother had always said that that was where God had started when He was creating the world, and that He had spent so long on Romsdalen that the rest of the world had to be done post-haste to be finished by Sunday. Jo Nesbø, The Bat

Åndalsnes is the “Hub” in Romsdal, and is situated in the middle of all the great things that is worth seeing and doing in the Romsdalsfjord area.

Åndalsnes is a great place to stay if you want to see and explore Trollstigen, Trollveggen, the Rauma Railway and the Romsdalseggen Ridge. Geiranger and the Geirangerfjord are well known places nearby. If you go westwards, you have the Atlantic Coast with the Atlantic Road, Ona Island with Ona Lighthouse, Bjørnsund and Midsundtrappene. Go North-East, and you will find the beautiful Eikesdal and the Mardalsfossen Waterfall, Aursjøvegen Mountainroad, and Litjdalen Valley. The cities of Ålesund, Molde and Kristiansund are nearby.

You can reach Åndalsnes by car, 6 hours from Oslo or 4 hours from Trondheim. By train to the end-station Åndalsnes at one of Norways most spectacular railways Rauma Railway. The nearest airport is in Molde, then one hour by bus to Åndalsnes.

From fjord to mountain in four and a half minutes. From Eggen Restaurant at the top of Mt Nesaksla you have a fantastic view down to Åndalsnes and the Romsdalsfjord. The gondola goes from the fjord station at the center of Åndalsnes to the mountain station at Mt Nesaksla, 694 maf (meters above the fjord).

Trollstigen is one of our Tourist Icons. It is part of the Geiranger-Trollstigen National Tourist Route, 18 kilometer from Åndalsnes. The Mountain Road with it´s 11 hairpin turns is closed during winter, it usually opens late May. From the Trollstigen Mountain Platou there is a short walk to the two new Viewpoints which is great for taking pictures. Five to ten minutes walk from the parking.

The Troll Wall (Trollveggen) in Romsdalen

Experience the UNESCO-protected Geirangerfjord and the Trollstigen Mountain Road, two of Norways most dramatic and most visited attractions. Stay at the Juvet Landscape Hotel that use the surrounding nature as part of the hotel. The National Tourist Route is 106 kilometer long and is closed during winter.

Romsdalseggen in Romsdal has in short time become one of the most popular hikes in Norway. The hike starts in the Vengedalen Valley in Isfjorden and ends in the city center of Åndalsnes. The prize is a fantastic view over the Romsdalen Valley and the Romsdalsfjord. From Romsdalseggen you can actually see all the way to the Atlantic Ocean.

Hiking to Rampestreken Viewpoint at Åndalsnes

Fjord Fishing on the Romsdalsfjord

Skipper and fishing guide John Kofoed takes you on an exciting fishing adventure after large fish or specific species of fish, all according to your wishes. The fishing banks are very close by Åndalsnes, and the Romsdalsfjord can offer the chance of big fish and a wide variety of species. All the fishing trips depart from the city center at Åndalsnes. Season all year. In the video below, John Kofoed’s fishing boat is on its way to Åndalsnes after a fishing trip on the Romsdalsfjord.

The Summer Boat on the Romsdalsfjord

The North West Experience’s summer boat takes you on unforgettable experiences on the Romsdalsfjord. The boat runs between Molde, Hjertøya, Veøya, Åndalsnes, Vestnes and Midsund. You can go on and jump off where you want. They also offer other boat trips that can be booked on request.

Isfjorden is a village at the innermost part of the Romsdalsfjord, close to Åndalsnes in Møre og Romsdal county. Easy arrivals to the surrounding valleys and mountains which is great for adventures.

By Car. A short detour by car (approximately 2.5 kilometer) from Riksvei 64 at Torvika between Åndalsnes and Åfarnes in Romsdal. Beautiful view towards the Romsdalsfjord and Innfjorden with it´s surrounding mountains. View from the road, no hiking necessary. But we recommend you to park the car at Torvika and walk along the road to Klungnes to get an even better experience.

Rødven Stave Church is situated down by the beautiful Rødvenfjord in Rødven, a branch of the Romsdalsfjord. It is believed that it was built around year 1300, but has older wood-materials and is probably from between year 1100 and 1200. Rødven Stave Church is one of two Stave Churches that also have exterior wooden pillars to support and to stiffen the building structure.

During an archaeological excavation in 1962 – 1963, remains were found from an older Stave Church on the site. Later it was found remains from settlements and graves from the Iron Age and the Roman Age. Coins from the 1100s has also been found around the Stave Church.

Drive eastwards along Langfjorden to Vistdal and Vistdalsheia and continue to Eresfjord and Lake Eikesdalsvatnet (22 masl). Drive along the 18 kilometer long lake to Eikesdal, a small village which is surrounded by steep mountains and waterfalls. From Eikesdal you can walk up to the Mardalsfossen Waterfall, one of Norway´s highest waterfalls with its 705 meter drop, divided into two vertical waterfalls. This hike takes between 30 and 45 minutes. The waterfall is regulated for hydroelectric power, but is “open” between June 20th and August 20th.

Hiking, 2-4 hours. Hiking to Mt Rørsethornet (659 masl) at Otrøya in the outer part of the Romsdalsfjord. On this hike, you walk on the longest stairway in Norway, 2200 steps (two kilometer long stairway) in stone made by Sherpas from Nepal. Fantastic view towards the Atlantic Coast and the Atlantic Ocean.

A 36-kilometer long stretch of road between the towns of Kristiansund and Molde. The Atlantic Road National Tourist Route runs from Kårvåg to Bud. There are several panoramic view- and rest areas with facilities in bold architectural forms along the Atlantic Road. Here you can experience both nature and architecture in great interaction. Some of the viewing platforms are also popular with anglers…and photographers.

If you want to see the best of the fjords, the mountains and the ocean in western Norway, this is the round trip for you. The route between Geiranger via Trollstigen to the Atlantic Road, Kristiansund and Molde includes one UNESCO World Heritage (the Geirangerfjord), two National Tourist Routes (Geiranger-Trollstigen and the Atlantic Road) and one “construction of the twentieth century” (the Atlantic Road).

Molde and the Molde Panorama

Molde by the outer part of the Romsdalsfjord is the second largest city in Møre og Romsdal. Molde is known as the town of roses, for Molde international Jazz Festival and the Molde Panorama.

Drive to the viewpoint Varden, 407 masl, and take in the spectacular Molde Panoramic View towards the Romsdalsfjord and the 222 snowcapped mountains.

In the summer, there are several boat departures from Molde to Hjertøya, a small island in the Romsdalsfjord. This is a great area for recreation and for swimming in the fjord. A small café is open on Saturdays and Sundays and a Fisheries Museum is located on the island.

Visit the Romsdal Museum in the centre of Molde. This is a Folk Museum where you can see more than 50 old buildings originating from the Romsdal region.

Take a day excursion to Ona Lighthouse, or stay over at Ona Havstuer. Drive westwards from Molde and take the ferry to the island of Aukra. From Småge, in the west on Aukra, there are several daily boat departures to Ona and other islands. Ona is a traditional fishing village with a permanent population of about 17. This small island community has its own summer-restaurant, several places to stay and two pottery workshops.

Accommodation in Romsdal and Nordmøre