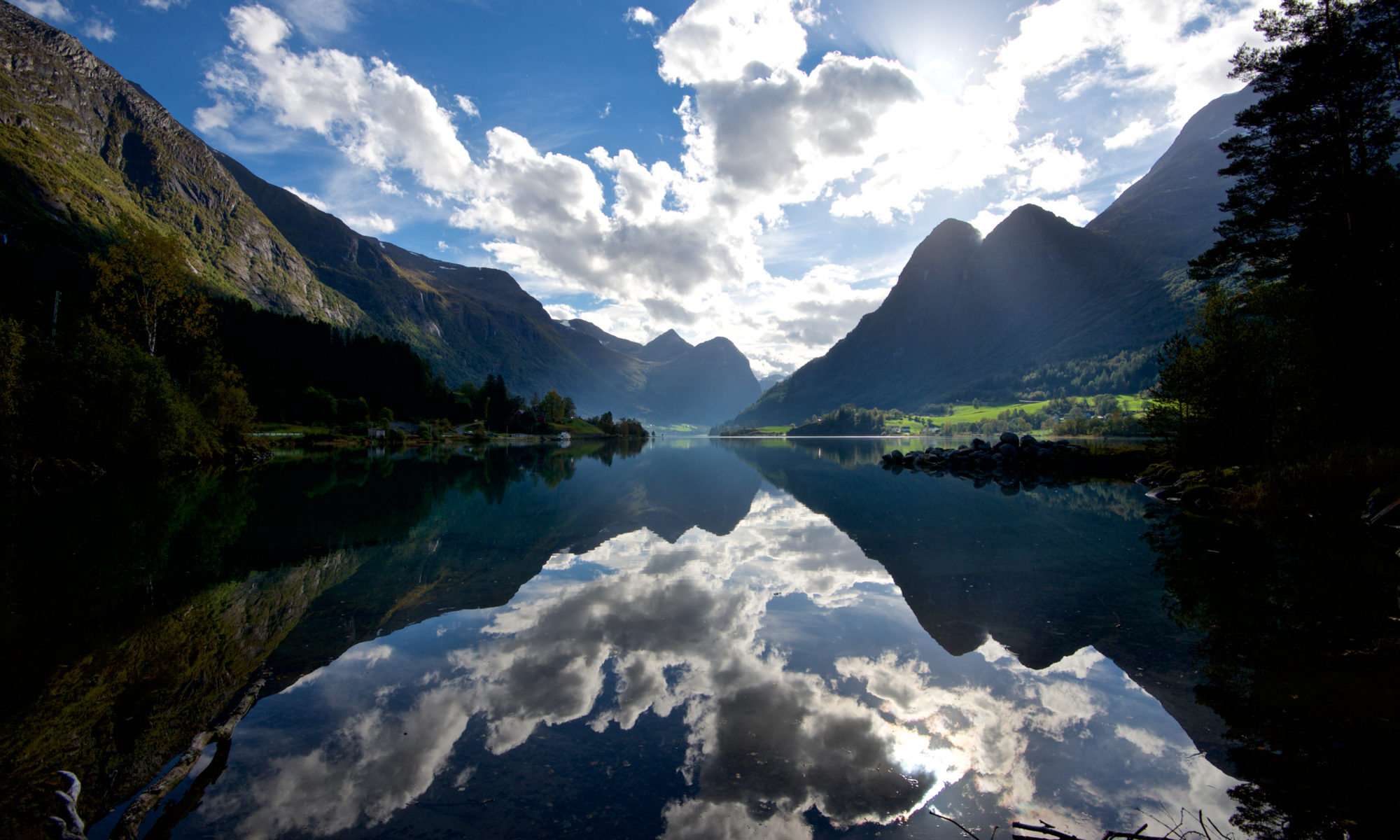 Sometimes the road is the goal. I was heading towards Sogndal and the Sognefjord, but decided to take a detour to Nordfjord to see more of the beautiful county of Sogn og Fjordane.

In the afternoon, I drove the shortest road from Oslo towards Stryn in Nordfjord. Just after midnight, I arrived Hjelle by Lake Oppstrynsvatnet in Oppstryn. It was late September, and the nights had become darker than during the summer.

Important information about roads in western Norway: Remember that many roads in western Norway are prone to landslides and avalanches, especially in rainy and snowy weather. This may include rock falls, rockslides, landslides, debris flows, mud flows, erosion, snow avalanches and rock avalanches. Some of the roads are particularly well-known for their high level of mass movements exposed over them. There might also be a chance that some of the roads are closed in short periods, especially during winter, due to weather and danger of rock- and snow avalanches and other dangerous conditions.

Many of the roads in western Norway are closed during winter! These roads usually opens early summer and close in autumn, depending on the amount of snow and the risk of landslides and avalanche in the surrounding mountains. This also applies to many of the National Tourist Routes and the Road Trips described in this website.

There are restrictions on the length of vehicles on many of the National Tourist Roads and on other roads in Norway. This also applies to many of the roads and road trips described on this website.

This website is not a guide or a travel planner, and the information on the pages should not be used accordingly. Marked and mentioned routes are not accurate and will also often change for various reasons, always look for updated information.

Morning mood at Hjelle in Oppstryn

Season: Summer. This also depends on whether the roads closed in winter are open.

I woke up early next morning, and the daylight had just started to light up the surrounding nature. Hjelle is a small and peaceful village down by the lake, and I enjoyed the beautiful scenery before the drive continued through Nordfjord and Sunnfjord towards Sogn. I had many stops on my way towards Stryn, where I had my breakfast at a local Café.

At Strynefjellet Mountain Road you can visit Stryn Summer Ski Centre. Ski equipment are available for rental. Normally there are excellent ski conditions, especially early summer. The summer ski season usually begins late in May, depending on the amount of snow on the winter closed road.

From Stryn to Loen

The drive continued to Loen. I passed Lake Lovatnet in the Lodalen Valley and drove to Kjenndalsstova at the inner part of lake Lovatnet. From far distance I could see the Kjenndalsbreen Glacier. This glacier is hanging down from the mountain, feeded by the Jostedalsbreen Glacier which is the largest ice-cap in Continental Europe. The road along Lake Lovatnet is surrounded by beautiful nature, mountains, waterfalls, rivers and glaciers.

Then I headed back to Loen and continued the drive to Olden and by Lake Oldevatnet into the end of the Oldedalen Valley to Briksdalen. From here, you can hike towards the Briksdalsbreen Glacier, a three kilometer long hike on a trail surrounded by some of the wildest nature on earth. During the hike, you pass the beautiful Kleivafossen Waterfall.

From Olden in Nordfjord via Sunnfjord to Fjærland in Sogn

The road continues towards Skei in Jølster, then along Våtedalen Valley beside Kjøsnesfjorden, through a tunnel to Fjærland at the inner part of the Fjærlandsfjord. The Fjærlandsfjord is a branch of the 204 kilometer long Sognefjord, the “King of the Fjords”. I recommend you to take the short detour to Fjærland, a beautiful village by the fjord. Here you have The Norwegian Book Town and the Norwegian Glacier Museum.

Hike to Mt Molden above the Lustrafjord

In the evening I arrived Sogndal, the goal for the trip. I stayed in Sogndal in the weekend, and on Sunday I hiked to Mt Molden in Luster before I drove back home to Oslo. Mt Molden is a great but short hike, approximately two hours hike to the summit, from where you have a fantastic view towards the Lustrafjord. This is one of the most popular hikes among the locals. Start at the parking place by the road between Hafslo and Mollandsmarki in Luster (500 masl). The path is marked.

During the stay in Sogn we also visited the village of Solvorn. Solvorn is a beautiful village down by the Lustrafjord. Here you have the oldest historical hotel in Norway, the beautiful Walaker Hotel. From Solvorn you can take the small ferry across the Lustrafjord to Urnes and visit Urnes Stave Church and the Feigumfossen Waterfall. Below are some pictures from Solvorn, Mt Molden, Mollandsmarki, the Lustrafjord and the Fjærlandsfjord.