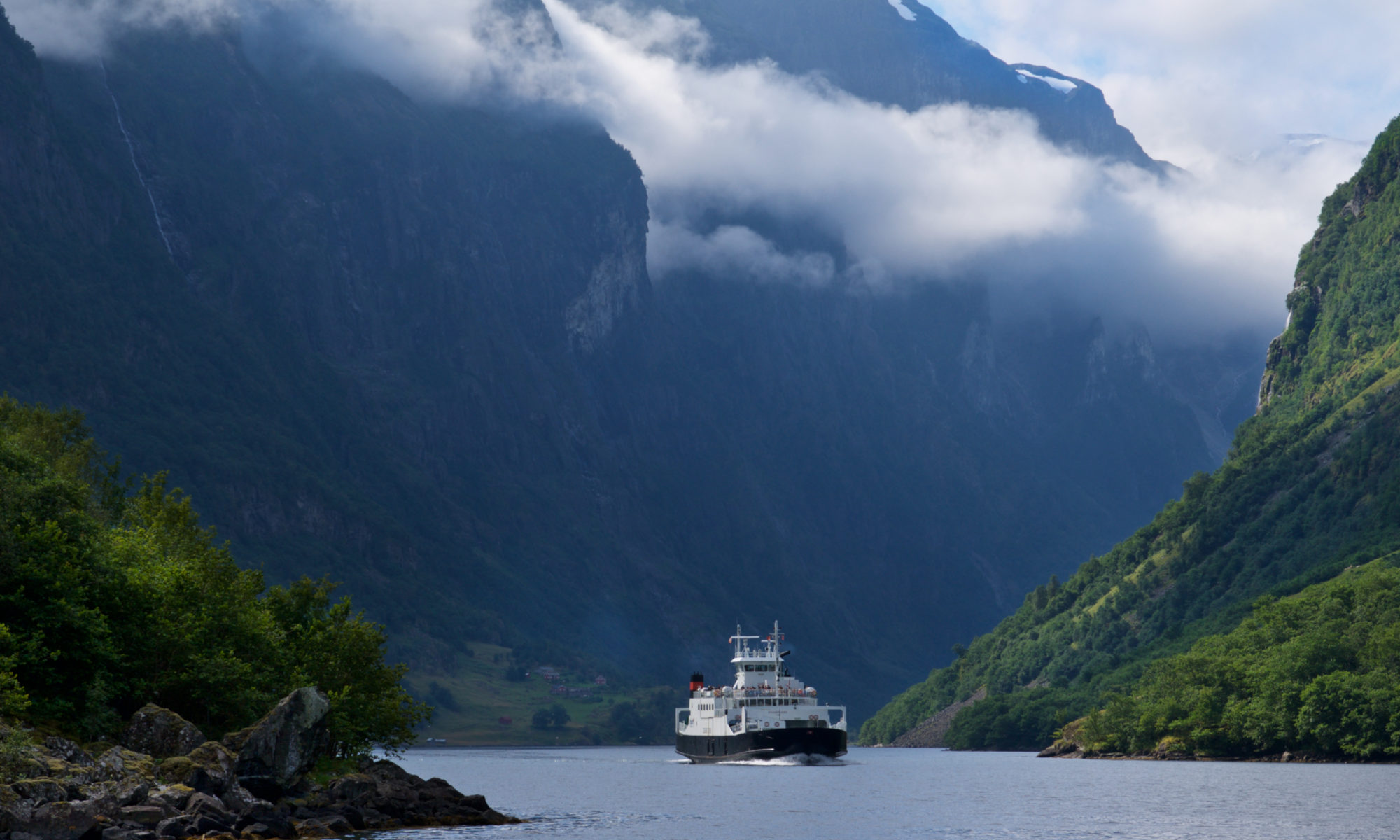 I didn´t have much time so it had to be a “turbo-tour” to the Sognefjord this time. After some planning and a few telephone calls I knew where and when to go.

The next 31 hours, I experienced the Bergen Railway, Biking the Flåmsdalen Valley, joined a Fjord Cruise on the Aurlandsfjord and Nærøyfjord, hiked along the Nærøyfjord and the Flåm Railway from Flåm and back to Myrdal.

The Bergen Railway to Myrdal

The weather forecast looked good, with sun and clear blue skies predicted from mid-day the next day.

I put on my rucksack and headed down to the local train towards Oslo. From Oslo I took the night express train towards Bergen. The train passed Finse at 1222 masl, which is the highest point on the Bergen Railway. Soon after Finse we arrived at Myrdal Station (865.5 masl) and I left the train there at 05:00 hrs.

Biking down the Flåm Valley

I had ordered a bike from Cafe Rallaren at Myrdal Station in advance, and picked up the bike and started biking at 05:30 hrs, down the last part of Rallarvegen (the Navvies Road). Then I continued on the 20 kilometer long road along the Flåm Valley, mostly downwards, towards Flåm at the inner part of the Aurlandsfjord.

It was fog and drizzling rain, but the atmosphere was magical in the dark. The waterfalls were frothing and roaring, the forest with it’s numerous trees were covered with moss. The air was fresh and cold. I was completely alone and it was wonderful. The hairpin trail down towards the Flåm Valley was steep, slippery and rocky but it turned out well and I was soon down in the main valley.

Towards Flåm and the Aurlandsfjord

The Flåm Valley is wild and beautiful with it’s steep mountains and vertical waterfalls. The trail had now become a road and the 20 kilometers from Myrdal to Flåm was an easy ride. The road is more or less downhill or flat all the way and at 08:30 hrs I arrived at Flåm down by the Aurlandsfjord, the end point of my bicycle tour. I left the bike down at Flåm Station, at a designated place for bikes from Café Rallaren. The bike was then taken care of and transported back to Myrdal, this was included in the rental price.

Fjord Cruise on the Aurlandsfjord and Nærøyfjord

The UNESCO Protected Nærøyfjord is an 18 kilometer long branch of the worlds second longest fjord, the Sognefjord (204 kilometers long). The Nærøyfjord is only 250 meters at the narrowest, and more than one kilometer at the widest. The depth varies between 10 and 500 meters. The surrounding mountains are up to more than 1400 meters high. Along the Nærøyfjord, we have the small villages Gudvangen, Bakka, Styvi and Dyrdal. Styvi is the only place without permanent inhabitants during the winter, and Styvi and Dyrdal are without road connection.

Boat across the Nærøyfjord to Bleiklindi

I had arranged in advance to be picked up by Svein from Kystled Sogn in his boat at Gudvangen. Svein helps people who need conveyance over the fjord. If you want a shuttle across the fjord as I did, you should contact Kystled Sogn and book the boat in advance. The boat can take you over from Bakka or Gudvangen, depending on what is most convenient for you. You can also contact Nærøyfjorden Camping if you want conveyance across the Nærøyfjord.

Svein and his boat took me to Bleiklindi, a good starting point for walking the Royal Postal Road to Styvi, six kilometers further out the Nærøyfjord. I had a lengthy break at the Quay at Bleiklindi. The weather was cloudy when I arrived,  but when I started the walk, the sun was shining brightly from a clear blue sky.

Note! If you take a Fjord Cruise from Flåm to Gudvangen, some of the boat departures stops on request at Styvi so you can either leave or board the boat there. Note that not all boats have this stop at Styvi, check the Fjord Cruise Time Table for more information about the departure and arrival ports. Also note that if you are at Styvi and want to inform the boat to stop there and take you onboard, you need to turn on the flasher at the quay at Styvi. You can leave the boat at Styvi and hike along the Nærøyfjord to Bleiklindi (the starting point in my story). If you have not agreed in advance with Kystled Sogn to meet you at Bleiklindi and take you across the fjord to Bakka or Gudvangen, you must walk the same way back to Styvi and board the boat at Styvi for return to Flåm or Gudvangen.

Walking the Old Postal Road by the Nærøyfjord

I had been kayaking the Nærøyfjord several times before, but I have never walked this trail and seen the fjord from land. It was a fantastic experience to see the fjord from another perspective. The Nærøyfjord was like a painting, with new motif’s turning up for almost every step I took. Most of the people I saw were either in boat, canoe or kayak, but I also met a few on land. The boat-traffic had increased since last time I was there, probably due to status as a UNESCO World Heritage site.

Styvi Fjord Farm and ferry back to Flåm

At Odnes I had a break near the outlet of the river Odneselvi. I was drinking cold clear water from the river while enjoying the view towards the fjord, the mountains, the boats and the kayaks passing by. Then the walk continued out the fjord, passing Klungrenes before I arrived at Styvi at 16:30 hrs. Styvi was the end-point of the trail, and the view from there is spectacular. Kjellaug and Botolv from Styvi are staying at Styvi every summer, serving people waffles and coffee. They also have a farm-museum with old tools etc. Styvi has got the smallest post office in Norway and they have their own postal code, 5748 STYVI, despite the fact nobody lives there during the winter.

The last ferry from Gudvangen sailed out the fjord. To inform them to stop at Styvi I turned on the flasher at the quay. I said goodbye to Kjellaug and Botolv and boarded the ferry. From the ferry I could see Styvi and the mountains become smaller, and soon both Styvi and the Nærøyfjord disappeared when the ferry turned around Mt Beitelen and into the Aurlandsfjord.

Flåm Railway to Myrdal and Bergen Railway back to Oslo

Back at Flåm, at the innermost part of the Aurlandsfjord, I entered the train at the Flåm Railway. This railway is one of Norway’s most spectacular with its 1 to 18 gradient and 20 tunnels taking you up the Flåm Valley to Myrdal. After a short stop at the wild and beautiful Kjosfossen Waterfall, the journey continued to the end station Myrdal which I had left 16 hours earlier. I had a few hours waiting time at the Railway Station at Myrdal before I boarded the night-train, this time in the opposite direction towards Oslo. I was tired but also full of impressions and experiences.

A fantastic day by the Sognefjord was at its end. I could hardly bear waiting for the next chance to come back to my favourite place on earth.

Information/Summary about my “Turbo Tour”

On a little more that a day I was biking the Flåm Valley from Myrdal to Flåm. I then took a Fjord Cruise from Flåm to Gudvangen and hiked the old Royal Postal Road along the Nærøyfjord before I joined a Fjord Cruise back to Flåm and took the Flåm Railway from Flåm to Myrdal.

I started and ended this adventure in Oslo, with the Bergen Railway from Oslo to Myrdal and then back to Oslo the following night. All this took only 31 hours in total from/to Oslo Central Station. The train departed from Oslo at 23:25 hrs and arrived at Myrdal at 04:34 hrs. The return started at Myrdal at 01:04 hrs and I arrived in Oslo at 06:13 hrs. Note that the times for the trains may change, check VY and the Flåm Railway for correct time tables.

To do this in 31 hours is tough, not much sleep, but very nice. Anyway, if you have the time, I would stay a night or two in Flåm or Aurland to experience even more in this area.

Here you will get everything in one day. Fjord cruise from Flåm to Dyrdal in the Nærøyfjord, kayak from Dyrdal to Odnes which is further in and on the other side of the Nærøyfjord. Then hiking along parts of the Royal Post Road to Bleiklindi before you paddle back to Dyrdal and fjord cruise back to Flåm. This adventure-package is delivered by Norway´s Best.

The Nærøyfjord and Aurlandsfjord Area – What to See and Do

The Nærøyfjord is one of the worlds most beautiful and dramatic fjords. It is included in UNESCO´s World Heritage List. Join a Fjord Safari, a Fjord Cruise or experience the fjord in a kayak. See the view from Stegastein Viewpoint or taste the local Goat Cheese in Undredal by the Aurlandsfjord. The Nærøyfjord and Aurlandsfjord are part of the 204 kilometer long Sognefjord which is located in the northern part of the county of Vestland, in the middle of Western Norway.

Sakte – Stay and Explore the Aurlandsfjord and Nærøyfjord

“Sakte” is a collaboration between companies that provide adventures, accommodation, dining and short-travelled food- and products. “Sakte” are located in the area around the Aurlandsfjord and Nærøyfjord and is an offer for those who want to contribute to a sustainable society in the world heritage area.

Accommodation in the  Aurlandsfjord and Nærøyfjord area

Overview of where you can spend the night in the area around the Aurlandsfjord and Nærøyfjord.

Biking Flåm Valley and Hiking along the Nærøyfjord – Map Overview