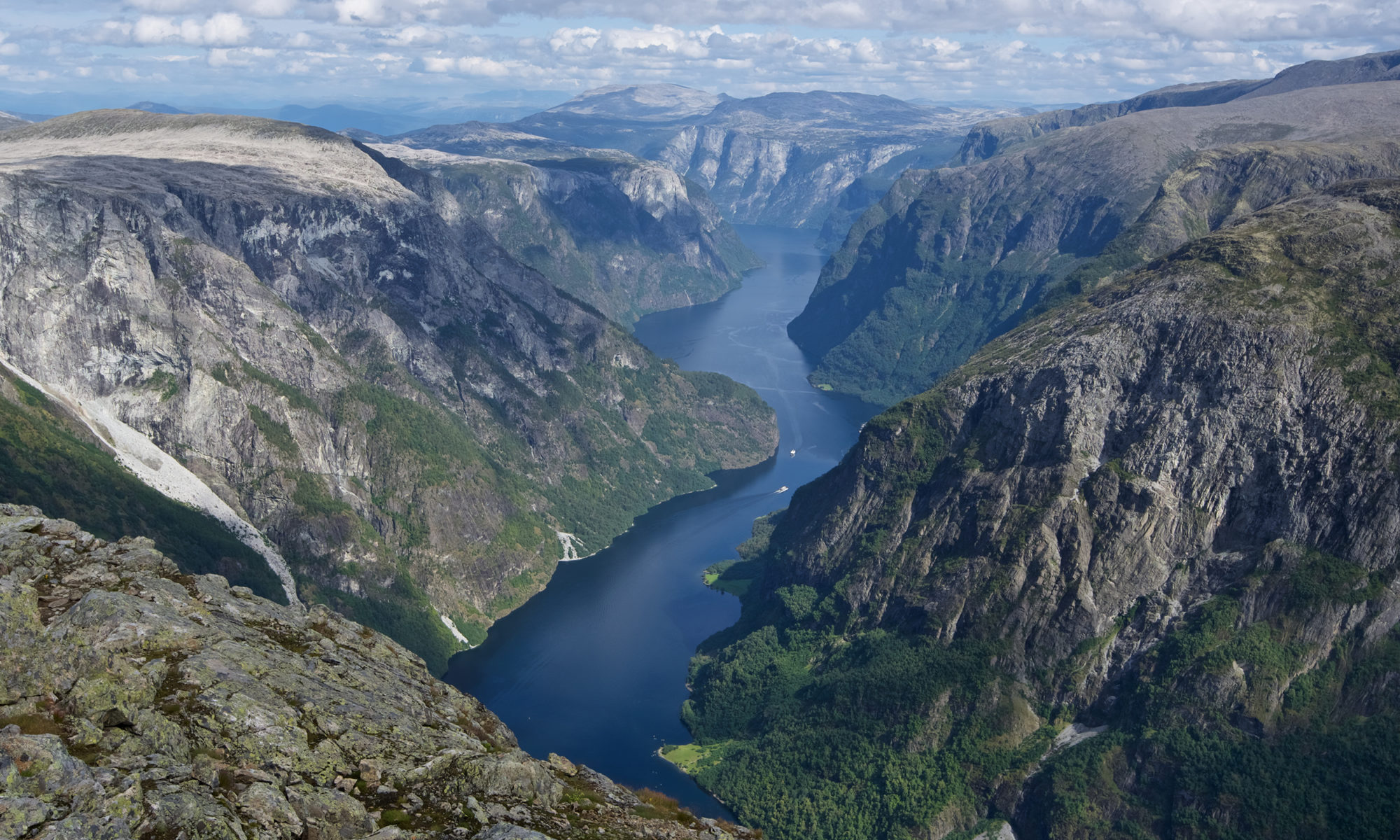 Fjords are found in locations where current or past glaciation extended below current sea level. A fjord is formed when a glacier retreats, after carving its typical U-shaped valley, and the sea fills the resulting valley floor.

This forms a narrow, steep sided inlet (in Norway, sometimes deeper than 1300 meters) connected to the sea. The terminal moraine pushed down the valley by the glacier is left underwater at the fjord’s entrance, causing the water at the neck of the fjord to be shallower than the main body of the fjord behind it.

By A. Nesje, S.O. Dahl, V. Valen and J. Øvstedal
Department of Geography and Geology, University of Bergen.

Fjord – the name and the origin

Fjord, from the norse “fjörðr”, means “der man ferder over” (English “where you travel across”) or “å sette over på den andre siden” (english “put across to the other side”).

Pictures of some fjords in Western Norway

A fjord, as the Sognefjord, is per definition a glacially overdeepened valley, usually narrow and steepsided, extended below sea level and naturally filled with seawater. The major part of the Sognefjord relief as we know it today started with glacial erosive process at the beginning of the Quaternary period/Pleistocene epoch, 2, 5 million years before present. Give or take the usual Geological uncertainty and disagreements.

The Pleistocene climate was characterized by repeated glacial cycles, ending 10000 years before now, by the introduction of the mild Holocene sub-epoch. Four major glacial events have been identified through the Pleistocene, as well as many minor intervening events.

See below an illustration of the geologic time table covering Tertiary and Quaternary ages:

As for the Sognefjord, the result was dramatic. From the original (paleic) landscape, at that time only penetrated by a single river system, the glaciers abrased, plucked, gnawed and washed away an amount of rock corresponding to roughly 7600 cubic kilometers, resulting in a valley 204 000 meter long and a maximum relief of 2850 meter. From the fjord region of Western Norway alone, a total of 35 000 cubic kilometers of solid rock was removed and dumped on the continental shelf.

Fjord Guide to the most beautiful fjords

Here is a guide to the 10 most beautiful fjords in Norway. Two of the fjords, the Geirangerfjord and the Nærøyfjord, are part of the UNESCO World Heritage. The Sognefjord is the longest fjord in Norway with its 204 kilometers.

Fjords are some of the most dramatic landscape features on earth, and the origin and processes related to this feature have been discussed for almost a hundred years. This debate has mainly focused on the classic fjords and fjord lakes in Norway and Canada. Most authors agree that there has been a clear glacial-erosive influence on the fjords, but the importance of glacial activity relative to such other processes as tectonism and fluvial erosion has not been clear. To explain how a fjord is formed, we use Sognefjord as an example…

In this paper, we have calculated quantitatively the amount of Quarternary bedrock erosion in the Sognefjord drainage basin in western Norway. The volume of eroded bedrock is then used for simple calculations of mean Quaternary glacial erosion rates.

The Sognefjord is the largest fjord system in Norway, penetrating more than 200 kilometers inland from the coast of western Norway (Fig. 1). There is a correspondance between the fracture systems in the bedrock and the trend of the main fjord and its branches. These fracture systems have been important for guiding erosion.

The longitudinal profile of the Sognefjord (Fig. 2) shows one main basin with a relatively flat bottom bounded to the west by a high threshold. The main fjord, starting in the eastern part at Årdal (190 km), becomes abruptly deeper westwards to reach depths of about 800m below the present sea level where it coalesces with the Lustrafjord. The maximum depth (1308m) of the Sognefjord is at Vadheim, further out. The fjord bottom then rises to the Solund area, and the sea bottom extends westwards at depths of 100-150m.

The outer Sognefjord has few tributary or distributary fjords. The inner part, however, has five branches (Fjærlandsfjord, Årdalsfjord, Nærøyfjord & Aurlandsfjord and Lustrafjord) (Fig. 1). These tributary fjords to the Sognefjord all “hang” above the bottom of the main fjord, and some of the branches have minor basins and thresholds.

The Sognefjord is presumed to follow a preglacial (original/paleic) river system. In many places the paleic surface is preserved more or less unaltered and the paleic surface and the present landscape commonly occur together (Fig. 3). The consistent and gradually rising summit level eastwards along the Sognefjord (Fig. 2) may therefore be regarded as remnants of the paleic surface. However, the preglacial valley floor is difficult to reconstruct accurately along the present fjord (Fig. 2), and this introduces some uncertainties when calculating glacial erosion.

Assuming that consistent summit levels and the wide, high-lying valley represent the paleic, pre-Quaternary land surface, the present relief represents the total Quaternary erosion and denudation. Both glacial and fluvial erosion are selective and follows zones of bedrock weakness, but at different rates. Therefore, the relative amounts of glacial and fluvial erosion must have varied greatly from site to site. The total Quaternary erosion and denudation is quantified by subtracting the present landscape from the reconstructed paleic surface.

Excluding the Quaternary sediments at the bottom of the Sognefjord, the volume difference between the reconstructed paleic surface and present topography is 7610 km3.

The volume of 7610 km3 of eroded bedrock distributed over the Sognefjord drainage basin (12,518 km2 ), yields an average vertical erosion of 610 m. Supposing that the erosion of the Sognefjord basin started at the beginning of the first significant Quaternary glaciations in Scandinavia 2.57 million years ago (Ma), the average erosion rate was 24 cm/1000 yr (0.024 mm/yr). The volumes of large submarine fans on the mid-Norwegian continental shelf deposited during the last 2.5 million years correspond to a total erosion of 500­1000 m in a zone along the Norwegian coast. In the Barents Sea and on the Norwegian continental shelf these fans represent a sudden increase in the rate of sedimentation after tectonically stable conditions during Oligocene/Miocene, and this is assumed to be associated with a significant uplift of western Scandinavia after 2.5 million years. Some of the increased sedimentation may be the result of fluvial erosion following the uplift, but it is difficult to separate from glacial erosion.

During the Quaternary there have been several glacials and interglacials. The first significant expansion of the Scandinavian ice sheet occurred at 2.57 Ma. Minor glacier expansions, however, are recorded at 5.5 to 5 Ma, 4.5 Ma, between 4 and 3.5 Ma, and at 2.8 Ma. The period between 2.57 to 1.2 Ma was dominated by about constant glacial activity with small amplitudes between glacials and interglacials. After 1.2 Ma the amount of ice ratfed detritus (IRD) increased, indicating larger glacial activity in Scandinavia . The last 0.6 Ma were characterized by short, but warm interglacials between significant glacials with deposition of large amounts of IRD on the Vøring Plateau, indicating that Scandinavian ice sheets frequently reached the edge of the continental shelf. 600,000 years (23%) during the last 2.57 Ma were dominated by ice sheets reaching coastal regions.

Based on this value and assuming only glacial erosion, the average rate of ice erosion in the Sognefjord drainage basin was 102 cm/ 1000 yr (1.02 mm/yr). This is of similar magnitude as erosion rates calculated for modern Norwegian glaciers, which range from 1.6-O.OS mm/yr.

Taking into account the selective nature of ice streams, annual erosionrates for ice streams in the Sognefjord drainage basin probably varied between 1.02 and 3.3 mm/yr. An annual erosion rate of about 2 ± 0.5 mm/yr seems therefore most reasonable.

Pictures from the Sognefjord area

The degree to which overdeepening can take place depends on the relationship between the thickness of the ice and its velocity. These variables critically affect the effectiveness of abrasion and other erosional processes. When the ice is thick, threshold values between increasing and decreasing abrasion show that the ice must have a high velocity to erode effectively. Within a narrow critical zone, the combination of great thickness and high velocity thus provides the optimum conditions for a high abrasion rate. As overdeepening has taken place in the Sognefjord, and the ice is suggested to have been more than 2000m thick along inner parts of the fjord, ice velocities must have been very high along the Sognefjord drainage channel. Similar channelized ice flows occur at present in Antarctica and Greenland with measured annual ice velocities of about 500m. However, these fast moving ice streams are connected with rapid subglacial deformation of water-saturated unconsolidated till.

The present landscape features along the Sognefjord are the result of several erosive processes; glacial abrasion, glacial plucking, subglacial meltwater abrasion, fluvial down-cutting, subaerial denudation and non-glacial downslope movement. Compared to fluvial erosion and subaerial denudation, glacial erosion processes are by far the most effective, though it is impossible to quantify the contribution from each of them. Since both fluvial downcutting and subaerial denudation during the Holocene are insignificant, this may also have been the case for preceeding interglacials. As the contribution from these processes probably is within the error limits of our volume calculations, the contribution from these erosive agents is ignored in our estimates.

Pictures from the Fjærlandsfjord, a branch of the Sognefjord

(1) The volume difference between the paleic and present landscape in the Sognefjord drainage basin is 7610 km3.

(3) Supposing that the erosion of the Sognefjord basin started at the beginning of the first significant Quaternary glaciations in Scandinavia at 2.57 Ma, the average erosion rate was 24 cm/1000 yr.

(4) Supposing that an ice ratfed detritus (IRD) curve from the Vøring Plateau reflects paleoglaciations in western Scandinavia , 600,000 years (23%) during the last 2.57 Ma were dominated by ice sheets reaching coastal regions. Based on this value and assuming only glacial erosion, the average rate of ice erosion in the Sognefjord drainage basin was 102 cm/1000 year (1.02 mm/yr).

(7) Based on the selective nature of glacial erosion along ice streams, annual erosion rates for ice streams in the Sognefjord drainage basin probably varied between 1.02 and 3.3 mm/yr.
An estimate of 2 ± 0.5 mm year seems most likely.

(8 ) If the average Quaternary erosion of 610m in the Sognefjord drainage basin is representative, about 35,000 km3 of rock was eroded from the fjord region of western Norway during the Quaternary.